A major is a set of roughly eight to twelve courses taken in a single academic department, and often includes “cognate” courses. Cognates are required courses for a major that must be taken in another department. Majors require cognates because they impart knowledge and skills in another academic discipline that are essential to understanding the material in your major.

Courses in the major generally conform to a pattern of graduated sophistication and complexity: courses for beginners in an academic discipline are usually numbered in the 100 to 200 range. Intermediate level courses may be numbered in the high 200s to the 300 range, and advanced courses tend to carry numbers in the 400s. Placement tests often determine where you should begin (especially in Mathematics and Foreign Languages). Absent a placement test, you should consult with your adviser or a faculty member in your intended major to determine where it would be best for you to start.

How to choose a major

A minor is like a major area of study, but usually consists of about six courses. Students often choose a minor that they feel complements their major, but this need not be the case. One of the great things about a liberal arts education is the opportunity for you to gain a broad, wide-ranging knowledge base, so for that reason many students choose to pair a major with a minor that–on the surface–don’t appear to be related (for example, Chemistry and German). A real delight in your education as you progress is discovering the hidden connections–the subtle but powerful ways different areas of study are connected. Studying French language and culture, for example, gives you some unexpected insight into the history of science in ways you might not expect. So don’t be afraid to pursue your interests, talents and passions, even if they don’t seem to form a coherent whole at the beginning.

What is a Concentration?

A concentration is a set of roughly six courses that all relate, in differing ways, to a central theme or topic. It’s similar to a minor, but the main difference is that the courses offered in a concentration are drawn from several different academic departments. Examples of concentrations at K include:

Declaration of Major Day is Feb 5! 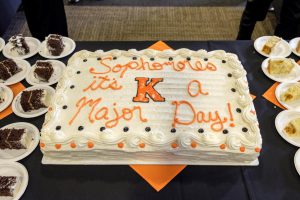